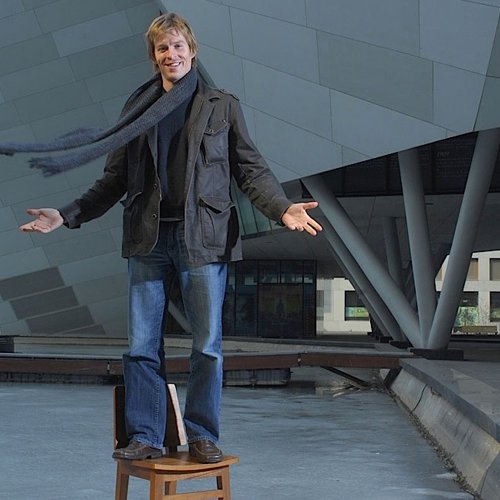 Reuben Langdon is a Los Angeles-based Actor/Producer/Activist/Truth Seeker. At a young age Reuben began his career in Japan as a series regular acting in theJapanese superhero TV series B- Fighter Kabuto. Helater relocated to Hong Kong to work alongside the mostrecognizable names in action, including Jackie Chan andSammo Hung. Eventually he made his way to Hollywoodand worked regularly as an actor and stuntman on theinternational hit show The Power Rangers and James

Cameron’s, Avatar. In addition to stunt doubling the main character, “JakeSully.” Reuben performed many of the stunts and movements for a numberof characters in the film. Complimenting his success in the world of film andtelevision, in 2001 he Co-created Just Cause Entertainment. (www.for-the-cause.com) An international production company producing digital contentfor video games and films. Thier most notable work is the Resident Eviland Devil May Cry franchises from Capcom. In April/May of 2013 Reubenproduced “The Citizen Hearing on Disclosure” (www.citizenhearing.org) a5-day mock Congressional Hearing on the UFO/Extraterrestrial topic. In recent years he has turned his noted career as an actor and producer of filmsand video games to producing and directing spiritual and conscious raisingtransformational projects.

Reuben, Mark and Charles formed Foundation For Common Good 501(c)(3) together, a not for profit whose tax exempt status has nurtured Green Campus into being. Back when Charles was living in Arundel Forest Garden, trying to live as harmlessly as possible, he met Reuben through team member Randy Powell who'se theories about the structure of the vacuum Charles was testing so he could make clean energy in the forest that did not hurt the insects like the fires do!

Randy and Charles set out to LA at the same time to test resonant circuitry and Randy introduced Charles to Reuben who was also making a TV show to test the many claims on the internet about super efficient resonant circuits and other over-unity energy claims. Charles, Reuben and Mark later founded The Foundation For Common Good 501(c)(3) to serve as the not-for profit structure that was to support Reuben's TV Show: Ultimate Energy Showdown: a kind of Dragons Den where the different free energy devices/claims are tested in-front of a panel of scientists who can test the devices.

The show never made it off the ground but Reuben, Randy and Charles worked with team member May East from Gaia Education, using the foundation to create Na'vi Camp, a concept for a thematic ecological educational environment based on James Cameron's Avatar that was to be launched alongside the franchises next few films. The three drew up The Na'vi Camp Concept Paper for James which he responded very positively to and referred it to his business partner and franchise co-owner, John Landau. Landau asked for a business plan and so Charles spent the next 5 months in New York Public Library and The Brittish Art Library drawing up a 60 page business plan with full team and financial model that could deliver the first few Na'vi Camps with amazing thematic programs that would serve to deliver the four returns for the communities that they were located in. Landau rejected the business plans and asked for licensing if we were to use the franchise name. Both Landau and Cameron suggested it might be better to use another name as the Na'vi theme may be limiting.

Thus Green Camp was born and Arundel Green Camp was set up and the first programs, Vegan Permacture and many other programs started to be delivered. Many of these programs were un-profitable and it was only when the camp that had been built up in Arundel Forest Garden started to be rented out that things became profitable.

Reuben has supported Charles through it all and remains available to lend his advice and we hope one day that Reuben will be hosting programs at Green Camps just as we planned with Na'vi Camp. See the images below. 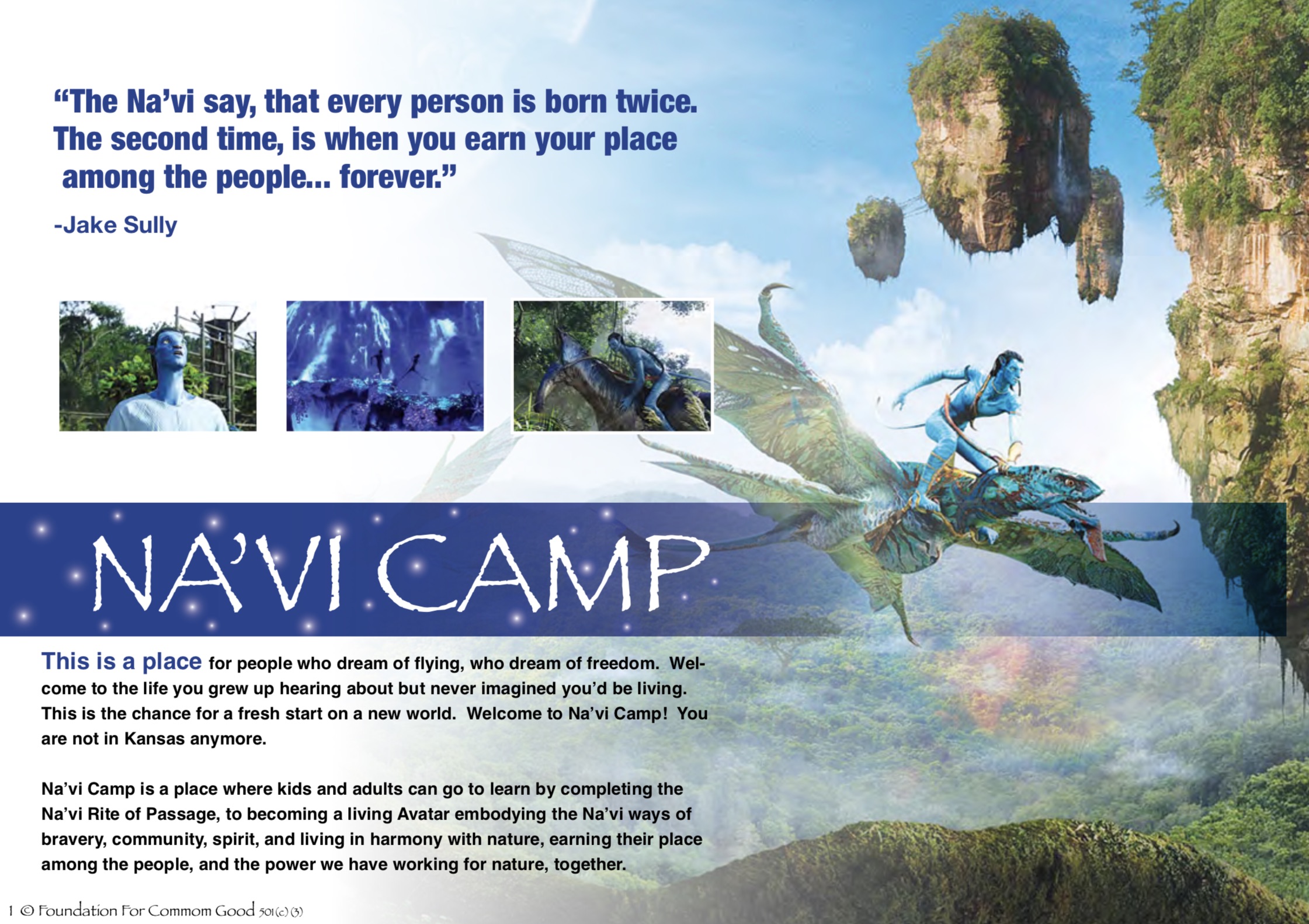 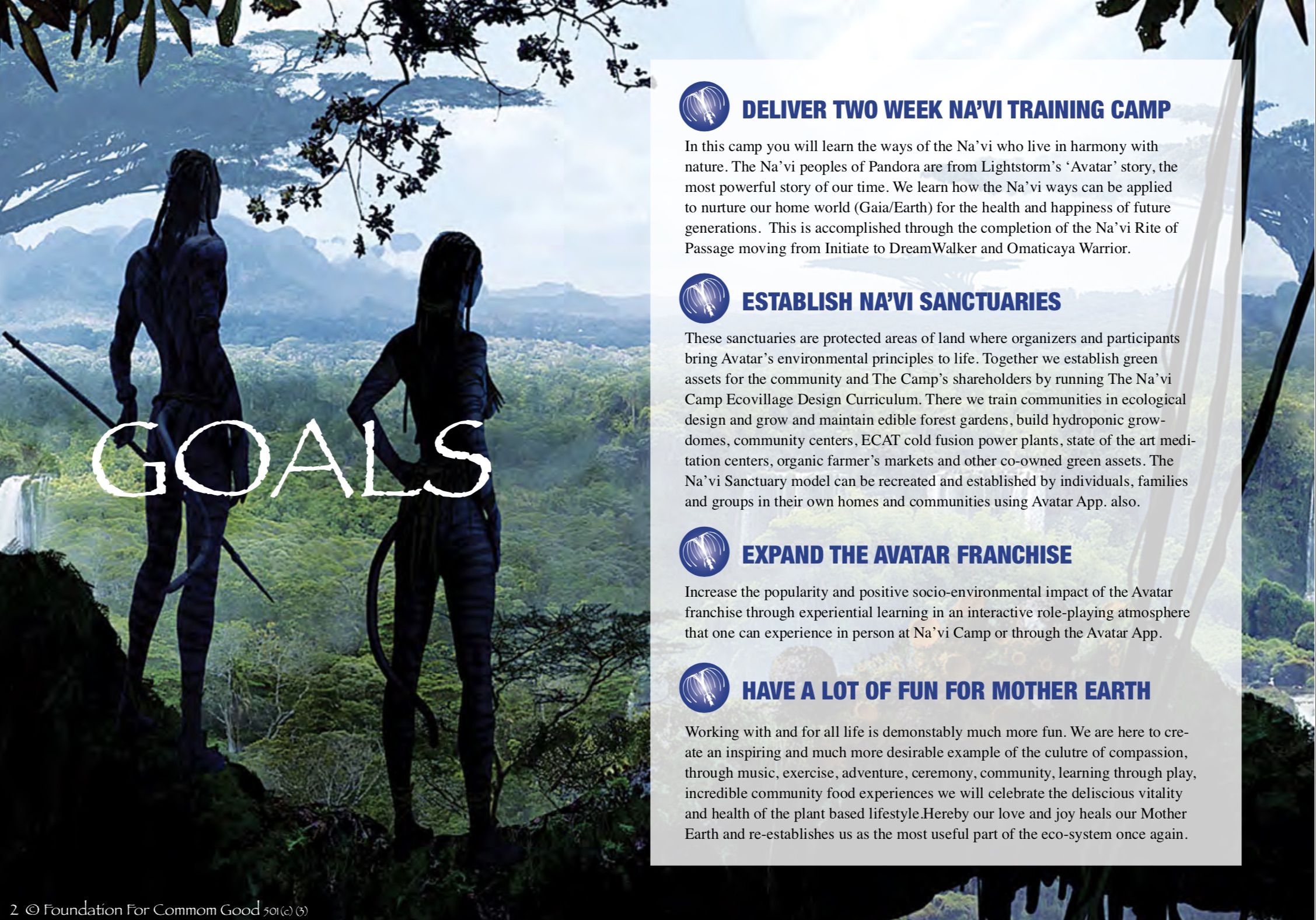 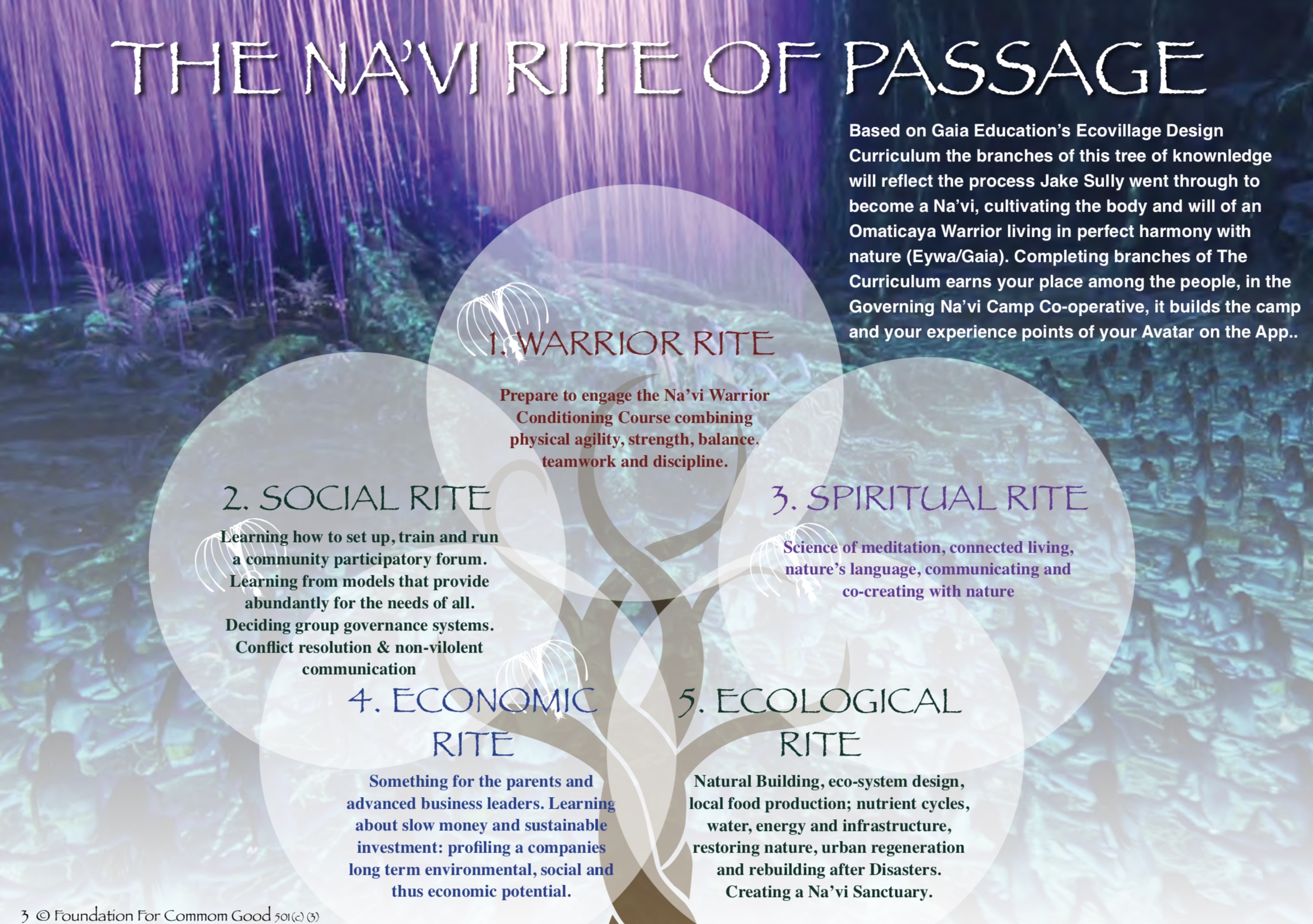 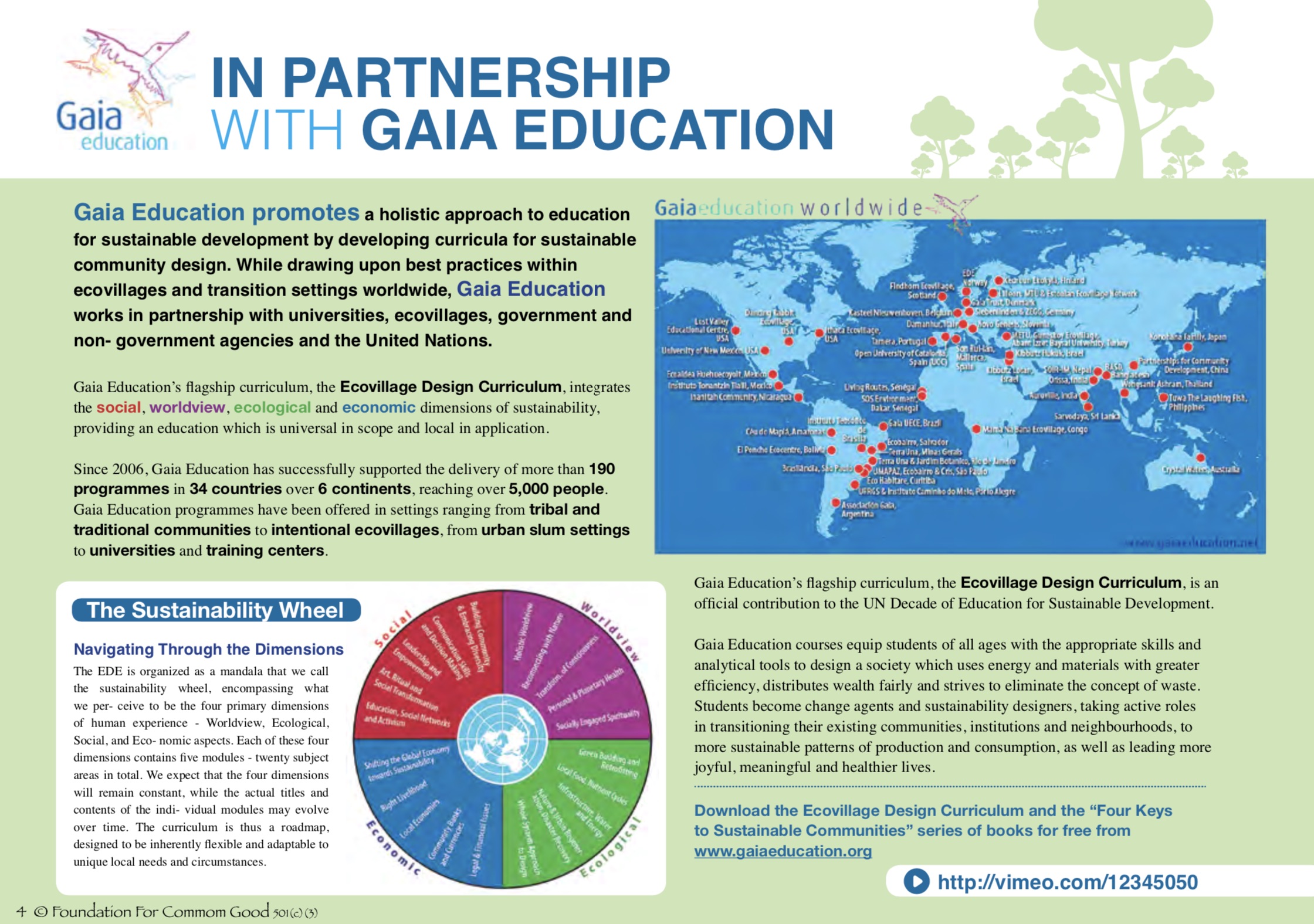 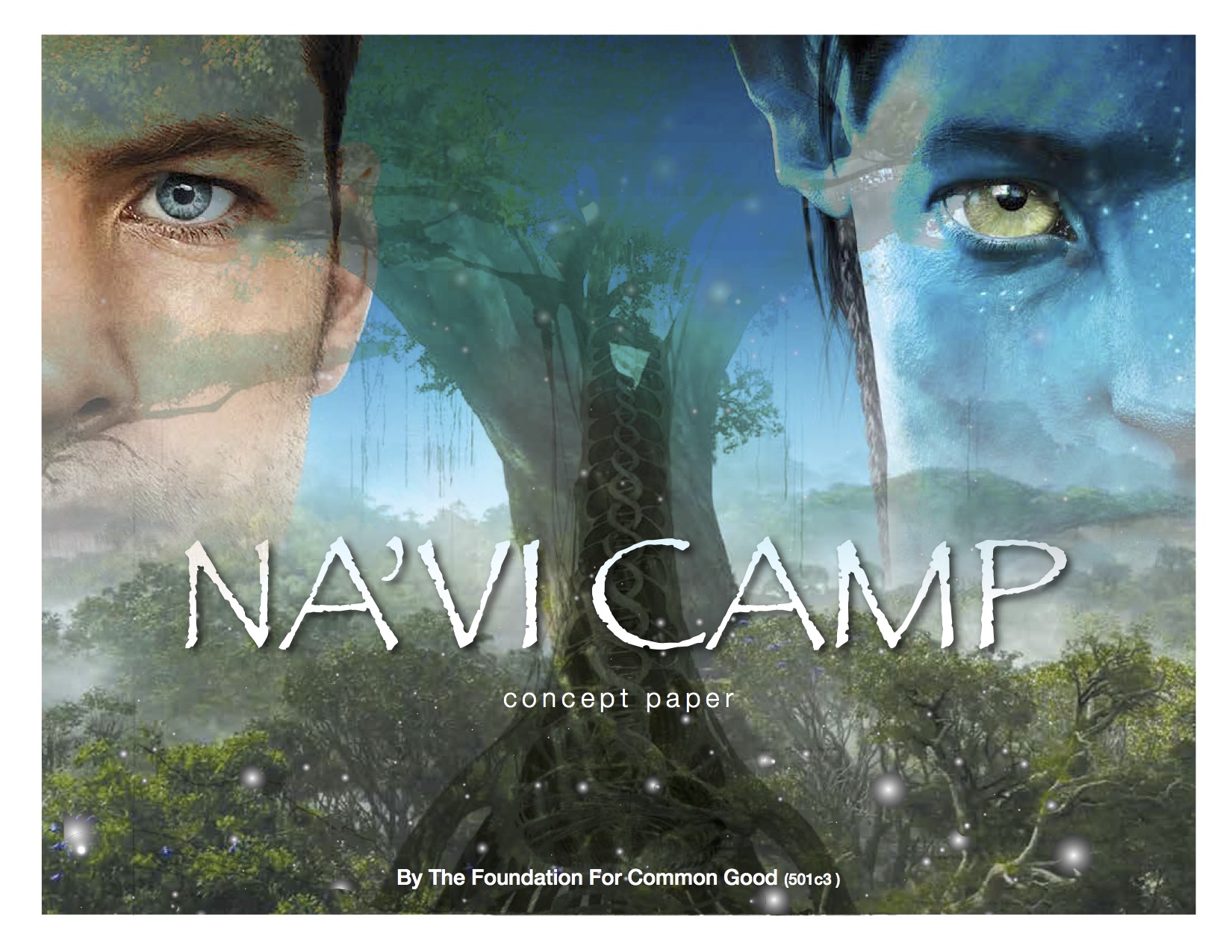 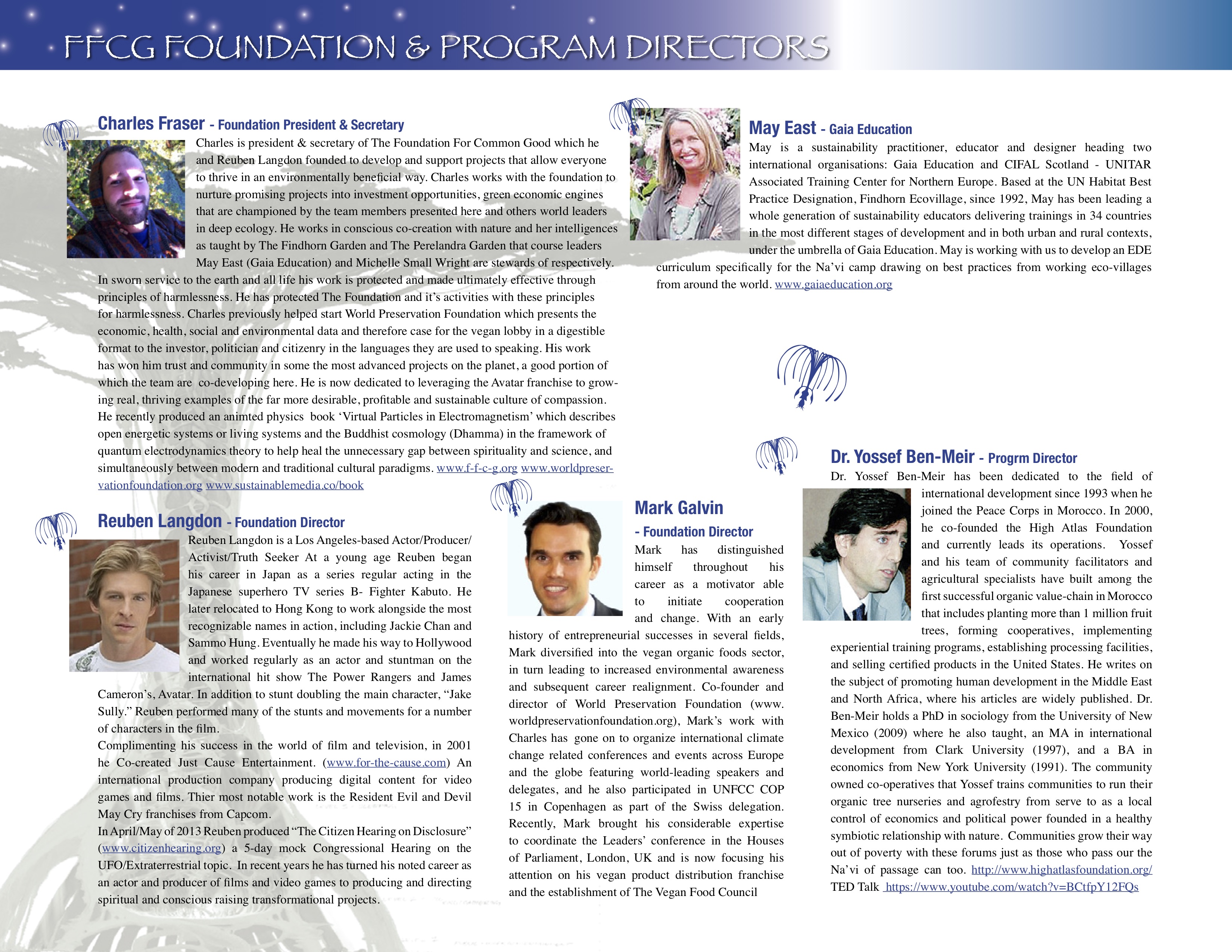 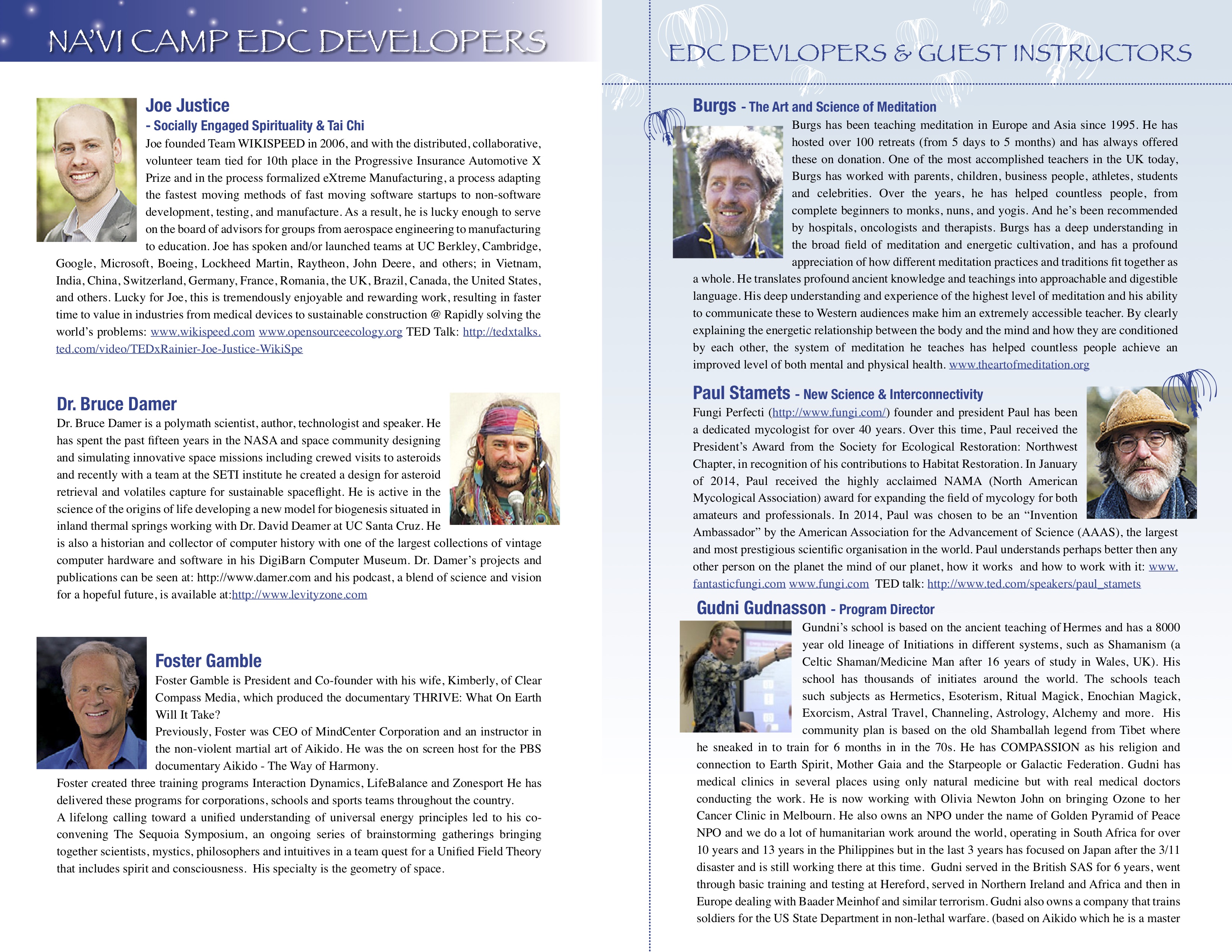 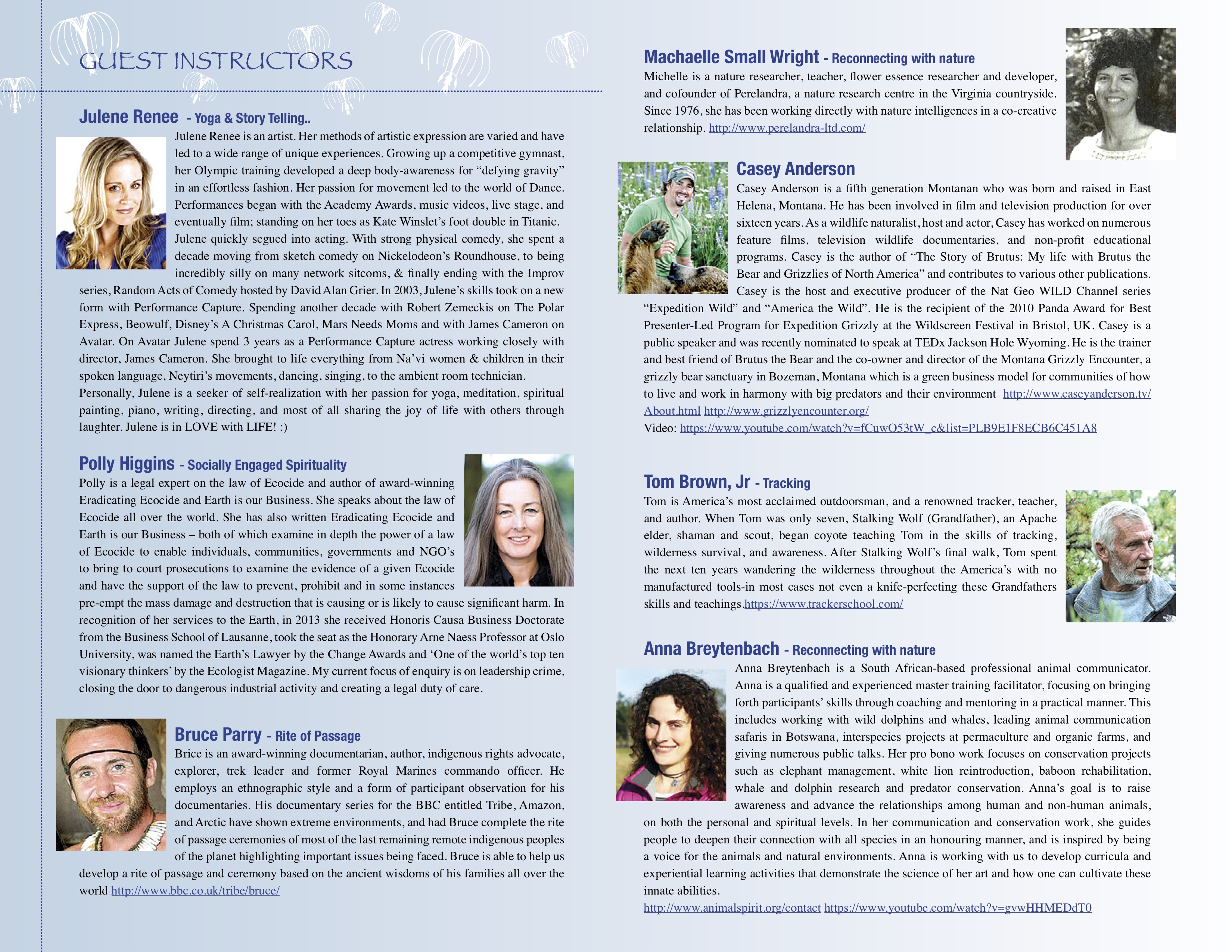 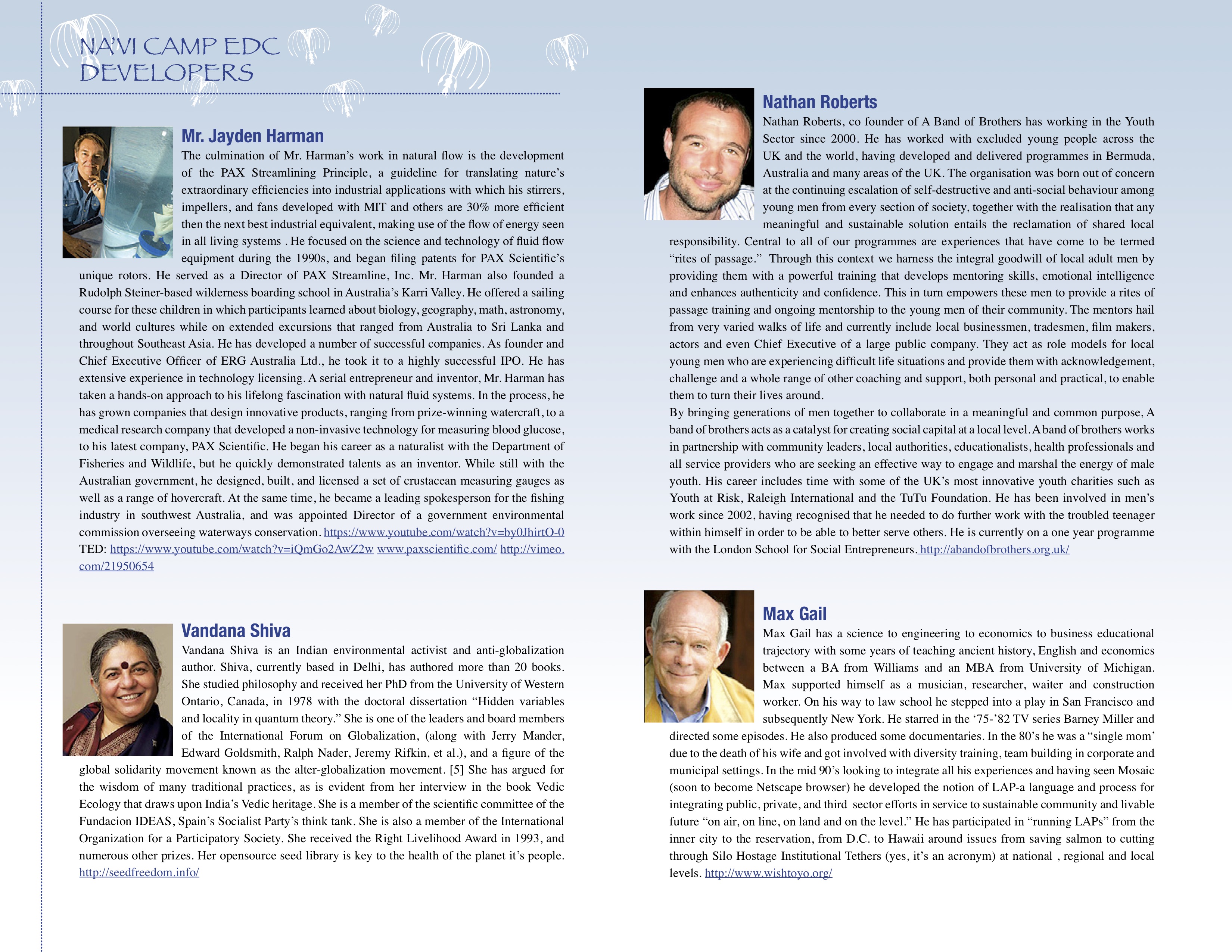 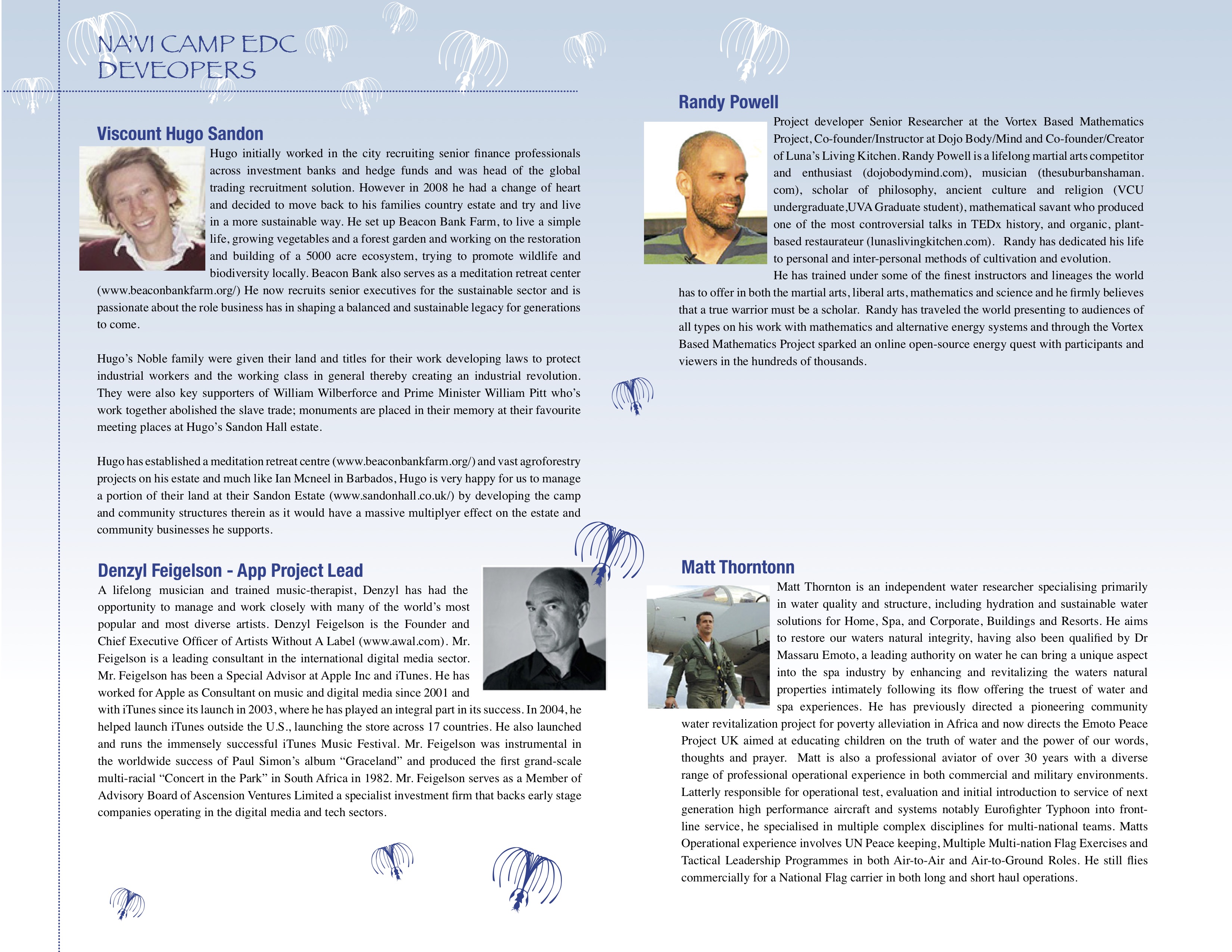 No journal entries yet - Check back later :O,